Brain Injury Australia has been engaged in concussion education since it prepared a policy paper on concussion in sport for the Australian Government’s (then) Department of Families, Housing, Community Services and Indigenous Affairs in 2012.

Since then, it has delivered a range of concussion education and training events for sports physicians, General Practitioners, physiotherapists, trainers, coaches and sports administrators, parents and players built around Brain Injury Australia’s “5Rs” of concussion – “Recognise the injury, Removal from play, Referral to a doctor, Rest and then Return to play.”

A day-long training in best practice concussion assessment, treatment and management, led by Professor Barry Willer, Director of Research in the Concussion Management Clinic at the University at Buffalo in Western New York and, Professor Gary Browne, Director of the Sports Concussion Service at The Children’s Hospital at Westmead, Sydney.

They were joined by Dr Julia Treleaven, from the Whiplash and Neck Pain Research Unit, the University of Queensland.

“…80 to 90 per cent [of concussions] result in an uneventful recovery within 10-14 days of injury. The 10 to 20 percent of eventful recoveries notwithstanding, perception is everything. And today’s typical parent will be swiftly unforgiving of any sport as soon as she, or he, suspects it’s playing chicken with their child’s brain.”BIA Executive Officer, Nick Rushworth

The video below is the first output of a joint concussion education initiative between Brain Injury Australia and Sports Medicine Australia, built around Brain Injury Australia’s trademarked “5Rs” of concussion – “Recognise the injury, Removal from play, Referral to a doctor, Rest and then Return to play” – and presented by Dr. Michael Makdissi, a member of the international authority – the “Concussion in Sport Group” – and team doctor for the Australian Football League 2013, 2014, and 2015 premiership-winning Hawthorn Football Club.

While the video is aimed at Australia’s General Practitioners, Brain Injury Australia is sure that coaches, trainers, sports administrators, and parents, will find the video relevant to best-practice concussion assessment and management. 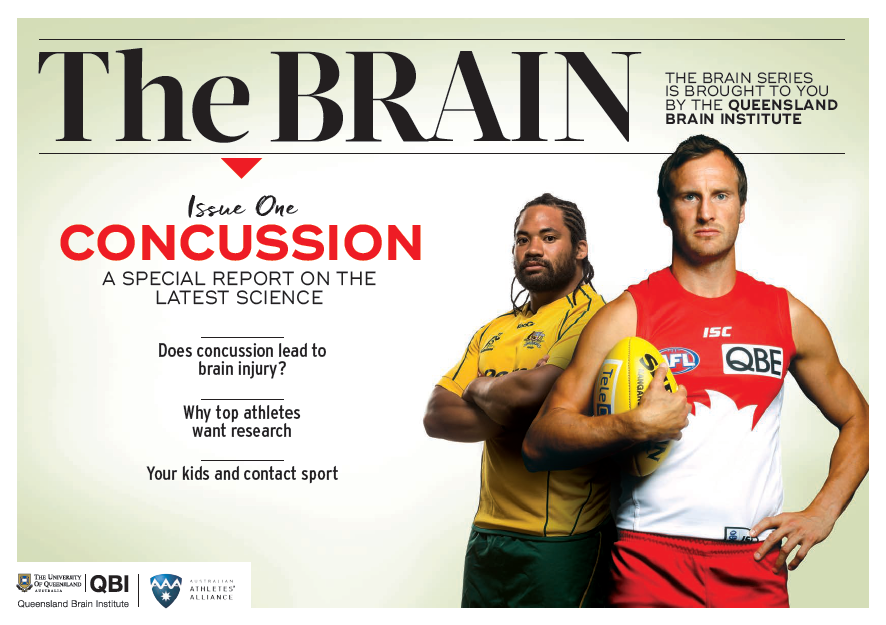 Brain Injury Australia’s Executive Officer, Nick Rushworth, has been appointed an “Ambassador” for the campaign.

International Conference on Concussion in Sport (2001-2016)

The Ontario Neurotrauma Foundation is “the leader in moving research to evidence-informed practices that can prevent neurotrauma, and in improving the quality of life and health outcomes for those living with neurotrauma.”

“This paper presents the Sport Concussion Assessment Tool 5th Edition (SCAT5), which is the most recent revision of a sport concussion evaluation tool for use by healthcare professionals in the acute evaluation of suspected concussion. The revision of the SCAT3 (first published in 2013) culminated in the SCAT5. The SCAT5 is intended for use in those who are 13 years of age or older.”

“This article presents the Child Sport Concussion Assessment Tool 5th Edition (Child SCAT5). Following the 4th International Consensus Conference, held in Zurich, Switzerland, in 2012, the SCAT 3rd edition (Child SCAT3) was developed for children aged between 5 and12 years. Research to date was reviewed and synthesised for the 5th International Consensus Conference on Concussion in Sport in Berlin, Germany, leading to the current revision of the test, the Child SCAT5.”

Centers for Disease Control and Prevention, HEADS UP to Youth Sports (US)