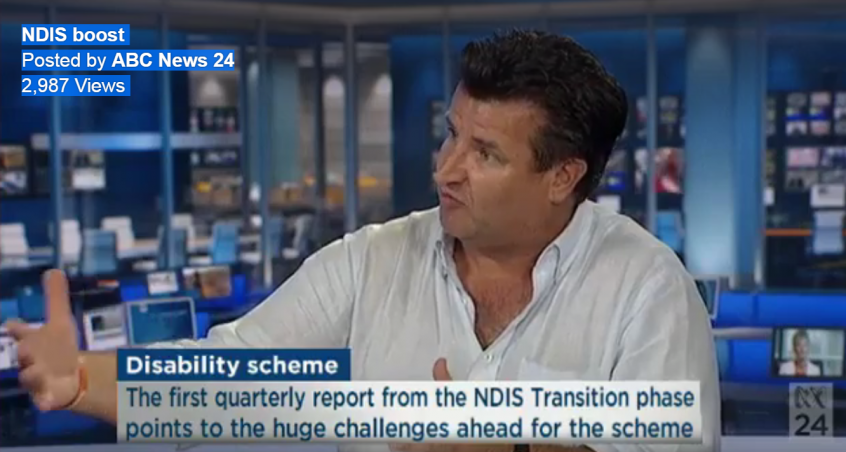 Rushworth says that active outreach to people with brain injury is essential to secure the success of the NDIS, especially outreach to special groups, including people in regional or rural areas, and within aboriginal communities.

“Brain Injury Australia’s fundamental reservation about the National Disability Insurance Scheme remains unchanged since the bill for its establishment was drafted. That – while some people with a brain injury will be able to navigate the new quasi-market of the Scheme as easily as the disability services system of old – many will not.

Specifically, Brain Injury Australia suspects that relatively few people with a brain will be able to readily transform themselves from the PASSIVE customers of disability services of tradition into active RETAILERS of their funding without an enabling infrastructure to do so.”

In an interview with Kumi Taguchi in 2013, Rushworth said that questions remain about how some of the NDIS will be funded:

“…as good as a $3 billion guaranteed, long-term injection of funding per annum is, there is still the unanswered question of where the remaining estimated $5 billion is going to come from. And certainly, Brain Injury Australia would be arguing for some particular kind of legislated fund that would again be quarantined from the whims of changing governments and from the annual bun fight over budgets.”

In August this year, 120 people from around Australia attended the Forum on the NDIS for people with a brain injury, held in partnership with the University of Sydney’s Centre for Disability Research and Policy.

Rushworth’s opening comments to the Forum.

Read more about the Forum here.